Also known as Don Bosco or Giovanni Melchior Bosco, he was the founder of the Salesian Society. Born of poor parents in a little cabin at Becchi, a hill-side hamlet near Castelnuovo, Piedmont, Italy, 16 August, 1815; died January 31, 1888; declared Venerable by Pius X, July 21, 1907.

When he was little more than two years old his father died, leaving the support of three boys to the mother, Margaret Bosco. John’s early years were spent as a shepherd and he received his first instruction at the hands of the parish priest. He possessed a ready wit, a retentive memory, and as years passed his appetite for study grew stronger. Owing to the poverty of the home, however, he was often obliged to turn from his books to the field, but the desire of what he had to give up never left him. In 1835 he entered the seminary at Chieri and after six years of study was ordained priest on the eve of Trinity Sunday by Archbishop Franzoni of Turin.

Leaving the seminary, Don Bosco went to Turin where he entered zealously upon his priestly labours. It was 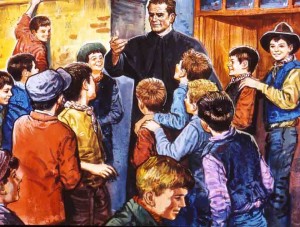 here that an incident occurred which opened up to him the real field of effort of his afterlife. One of his duties was to accompany Don Cafasso upon his visits to the prisons of the city, and the condition of the children confined in these places, abandoned to the most evil influences, and with little before them but the gallows, made such a indelible impression upon his mind that he resolved to devote his life to the rescue of these unfortunate outcasts. On the eighth of December 1841, the feast of the Immaculate Conception, while Don Bosco was vesting for Mass, the sacristan drove from the Church a ragged urchin because he refused to serve Mass. Don Bosco heard his cries and recalled him, and in the friendship which sprang up between the priest and Bartollomea Garelli was sown the first seed of the “Oratory”, so called, no doubt, after the example of St. Philip Neri and because prayer was its prominent feature. Don Bosco entered eagerly upon the task of instructing thus first pupil of the streets; companions soon joined Bartholomeo, all drawn by a kindness they had never known, and in February 1842, the Oratory numbered twenty boys, in March of the same year, thirty, and in March 1846, four hundred.

As the number of boys increased, the question of a suitable meeting-place presented itself. In good weather walks were taken on Sundays and holidays to spots in the country to spots in the country about Turin where lunch was eaten, and realizing the charm which music held for the untamed spirits of his disciples Don Boso organized a band for which some old brass instruments were procured. In the autumn of 1844 he was appointed assistant chaplain to the Rifugio, where Don Borel entered enthusiastically into his work. With the approval of Archbishop Franzoni, two rooms were secured adjoining the Rifugio and converted into a chapel, which was dedicated to St. Francis de Sales. The members of the Oratory now gathered at the Rifugio, and numbers of boys from the surrounding district applied for admission. It was about this time (1845) that Don Bosco began his night schools and with the closing of the factories the boys flocked to his rooms where he and Don Borel instructed them in rudimentary branches.

The success of the Oratory at the Rifugio was not of long duration. To his great distress Don Bosco was obliged to give up his rooms and from this on he was subjected to petty annoyances and obstacles which, at times, seemed to spell the ruin of his undertaking. His perseverance in the face of all difficulties led many to the conclusion that he was insane, and an attempt was even made to confine him in an asylum. Complaints were lodged against him, declaring his community to be a nuisance, owing to the character of the boys he befriended. From the Rifugio the Oratory was moved to St. Martin’s, to St. Peter’s Churchyard, to three rooms in Via Cottolengo, where the night schools were resumed, to an open field, and finally to a rough shed upon the site of which grew up an Oratory that counted seven hundred members, Don Bosco took lodgings nearby, where he was joined by his mother.“Mama Margaret”, as Don Bosco’s mother came to be known, gave the last ten years of her life in devoted service to the little inmates of this first Salesian home. When she joined her son at the Oratory the outlook was not bright. But sacrificing what small means she had, even to parting with her home, its furnishings, and her jewelry, she brought all the solicitude and love of a mother to these children of the streets. The evening classes increased and gradually dormitories were provided for many who desired to live at the Oratory. Thus was founded the first Salesian Home which now houses about one thousand boys.

The municipal authorities by this time had come to recognize the importance of the work which Don Bosco was doing, and he began with much success a fund for the erection of technical schools and workshops. These were all completed without serious difficulty. In 1868 to meet the needs of the Valdocco quarter of Turin, Don Bosco resolved to build a church. Accordingly a plan was drawn in the form of a cross covering an area of 1,500 sq. yards. He experienced considerable difficulty in raising the necessary money, but the charity of some friends finally enabled him to complete it at a cost of more than a million francs (about 200,000). The church was consecrated 9 June, 1868, and placed under the patronage of Our Lady, Help of Christians. In the same year in which Don Bosco began the erection of the church fifty priests and teachers who had been assisting him formed a society under a common rule which Pius IX, provisionally in 1869, and finally in 1874, approved.

Character and Growth of the Oratory

Any attempt to explain the popularity of the Oratory among the classes to which Don Bosco devoted his life would fail without an appreciation of his spirit which was its life. For his earliest intercourse with poor boys he had never failed to see under the dirt, the rags, and the uncouthness the spark which a little kindness and encouragement would fan into a flame. In his vision or dream which he is said to have had in his early boyhood, wherein it was disclosed to him what his lifework would be, a voice said to him: “Not with blows, but with charity and gentleness must you draw these friends to the path of virtue.” And whether this be accounted as nothing more than a dream, that was in reality the spirit with which he animated his Oratory. In the earlier days when the number of his little disciples was slender he drew them about him by means of small presents and attractions, and by pleasant walks to favorite spots in the environs of Turin. These excursions occurring on Sunday, Don Bosco would say Mass in the village church and give a short instruction on the Gospel; breakfast would then be eaten, followed by games; and in the afternoon Vespers would he chanted, a lesson in Catechism given, and the Rosary recited. It was a familiar sight to see him in the field surrounded by kneeling boys preparing for confession.

Don Bosco’s method of study knew nothing of punishment. Observance of rules was obtained by instilling a true sense of duty, by removing assiduously all occasions for disobedience, and by allowing no effort towards virtue, how trivial soever it might be, to pass unappreciated. He held that the teacher should be father, adviser, and friend, and he was the first to adopt the preventive method. Of punishment he said: “As far as possible avoid punishing, try to gain love before inspiring fear.” And in 1887 he wrote: “I do not remember to have used formal punishment; and with God’s grace I have always obtained, and from apparently hopeless children, not alone what duty exacted, but what my wish simply expressed.” In one of his books he has discussed the causes of weakness of character, and derives them largely from a misdirected kindness in the rearing of children. Parents make a parade of precocious talents: the child understands quickly, and his sensitiveness enraptures all who meet him, but the parents have only succeeded in producing all affectionate, perfected, intelligent animal. The chief object should be to form the will and to temper the character. In all his pupils Don Bosco tried to cultivate a taste for music, believing it to be a powerful and refining influence. “Instruction”, he said, “is but an accessory, like a game; knowledge never makes a man because it does not directly touch the heart. It gives more power in the exercise of good or evil; but alone it is an indifferent weapon, wanting guidance.” He always studied, too, the aptitudes and vocations of his pupils, and to an almost supernatural quickness and clearness of insight into the hearts of children must be ascribed to no small part of his success. In his rules lie wrote:“Frequent Confession, frequent Communion, daily Mass: these are the pillars which should sustain the whole edifice of education.” Don Bosco was an indefatigable confessor, devoting days to the work among his children. He recognized that gentleness and persuasion alone were not enough to bring to the task of education. He thoroughly believed in play as a means of arousing childish curiosity — more than this, he places it among his first recommendations, and for the rest he adopted St. Philip Neri’s words: “Do as you wish, I do not care so long as you do not sin.”